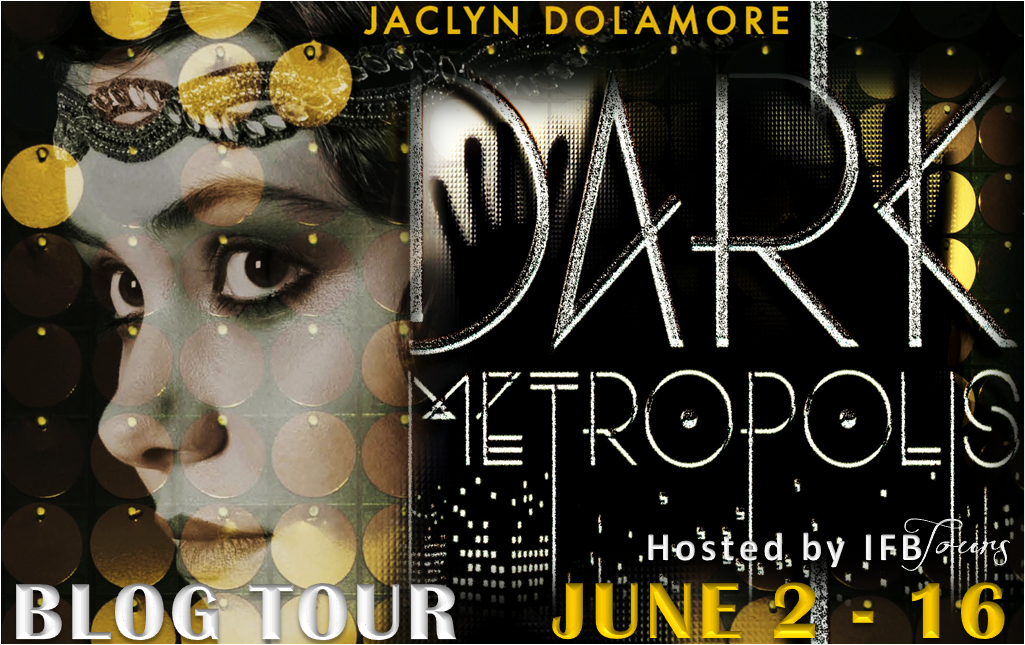 Sixteen-year-old Thea Holder's mother is cursed with a spell that's driving her mad, and whenever they touch, Thea is chilled by the magic, too. With no one else to contribute, Thea must make a living for both of them in a sinister city, where danger lurks and greed rules.
Thea spends her nights waitressing at the decadent Telephone Club attending to the glitzy clientele. But when her best friend, Nan, vanishes, Thea is compelled to find her. She meets Freddy, a young, magnetic patron at the club, and he agrees to help her uncover the city's secrets - even while he hides secrets of his own.

Together, they find a whole new side of the city. Unrest is brewing behind closed doors as whispers of a gruesome magic spread. And if they're not careful, the heartless masterminds behind the growing disappearances will be after them, too.

Perfect for fans of Cassandra Clare, this is a chilling thrille with a touch of magic where the dead don't always seem to stay that way.

Dark Metropolis was something very special. I expected a historical YA book with some mysterious aspects.  But this book was so much more. The book held a historical feel of the late twenties, early thirties with a mix of dystopian, thriller and supernatural. The book really had it all but it was written in such a way that all those elements weren’t overkill.


"The sky was turning a faint orange now, and then the colors began to deepand and change, blooming into different shades, transcending the drab appartments"

The story was told in multiple points of view. Nan, Thea and Freddy were at the same time the main character. They all had their own unique story to tell. But the story line was still easy to follow. The author did very well to develop these different characters. At the beginning of the book I thought that Thea was going to be the main character but then Nan and Freddy got more chapters in their point of view. Sadly Thea’s story disappeared a bit more to the background and it got more interwoven with Freddy’s story. But I hope to see more of Thea again in the next book. Just like Sigi, I really liked so I hope she gets more “show” time in the next book.

There were a quiet some twist and turns to keep the story interesting. And the plotline held quite a few surprises. So there wasn’t a dull moment in the book. Next to the action and mystery there was also a hint of romance, certainly near the end of the book. It was clear that Freddy and Thea more than liked each other but none of them really acted on it. Of course so much was going on in their lives that it was hard for them to act on it, even if they wanted too. But I can’t wait to see how there story develops in the next book.


"This was a kiss that said, Life is short, and sometimes awful, but we've mad it through what we must today, and we'll do it again tomorrow - together"

I was a bit disappointed by the ending of this book though. So much happened throughout the book and you could see all these events building up to a climax. But when the climax was finally there it felt a bit rushed and it could have been more powerful. Now it looks like it’s just a set up for the next book.

In general I really liked this book and I can’t wait till the next one comes out. So much can happen in it and it can go either way, good or bad. Definitely a book I would recommend to everyone who’s looking for a new YA dystopian, supernatural or historical book.

"The darkness was hard to bear. It was so deep it almost felt like something physicall pressing on Nan's eyes."

Jaclyn Dolamore was homeschooled in a hippie sort of way and spent her childhood reading as many books as her skinny nerd-body could lug from the library and playing elaborate pretend games with her sister Kate. She skipped college and spent eight years drudging through retail jobs, developing her thrifty cooking skills and pursuing a lifelong writing dream. She has a passion for history, thrift stores, vintage dresses, David Bowie, drawing, and organic food. She lives with her partner and plot-sounding-board, Dade, and two black tabbies who have ruined her carpeting.