It's been four years since twenty-year-old Jessica Hayes has been home, but when she discovers her father is dying, she must return to her hometown in South Carolina and face her past. Jessica thought patching up her relationship with her father would be her biggest challenge, but when she runs into Ryan Dawson - the catalyst of her problems - she wonders if coming home was a mistake.

Ryan knows he screwed up. Hell, he paid the price... with interest. But when he runs into his best friend's little sister, Jessica, he's reminded that his debt will never truly be paid. He may have turned his life around, but he can't undo the damage. So, he does what he should have done all those years ago. He stays away from Jessica, and all the other personal demons that still haunt him.
Jessica thought she wanted nothing to with Ryan, but something is different about him and she needs to know why. When she discovers the truth behind his change, she puts her troubles aside and tries to help him. But is putting her heart back in the line of fire worth disrupting her stable life back in Ohio, or will the past repeat itself, leaving her brokenhearted once again?

Ryan
As Luke and Jason chatted about the next race, I leaned against the rail, looking at the stars. After that night under the stars with Jessica, the night she told me I could be anything I wanted to be, I never looked at the night sky the same way. It was like the stars and I shared a secret, as if the night sky knew something about me that no one else did.
Jason leaned on the rail beside me. “What’s up?”
“Nothing.” I glanced over my shoulder. “Where’s Luke?”
“He went to the car to grab a bottle of whiskey.”
“Oh.” Maybe it was time for me to leave. Seeing the guys drinking whiskey while I had to hold back was probably a bad idea.
I looked around, trying to remember where I had parked my car.
“She didn’t come,” Jason said. He must have misinterpreted me and thought I was looking for his sister. “Rachel and Sophie stopped by the house and tried to convince her to come, but since you told her about your past, she’s been quiet. Well, quieter.”
I frowned. “Why?” He shrugged. “I didn’t tell her so she would feel bad about it. I told her because I realized she would find out one way or other. Better if it came from me.”
Jason nodded. “I know.” He tilted his head at me. “Are you okay?”
I chuckled—a sarcastic sound. “Never been better.”
With a hint of pity in his eyes, he placed a hand on my shoulder and squeezed. “You know I’m here for you, man. Whatever the problem is.”
“I know, J-man.” I sighed. However, there was nothing to be done. My problem was with the past, and unfortunately, I couldn’t change it. Neither could I let it go.
Luke showed up with the whiskey bottle. “Dude, it took me a few minutes to find it. I thought I had forgotten it.”
I glanced at the bottle, then at Jason. Comprehension spread across his face.
“Luke, maybe we shouldn’t drink that tonight,” Jason said.
Luke’s face fell, but a second later, he nodded. “Right. Of course.”
“Nah, it’s okay.” I pushed against the rail. “I have to wake up early tomorrow, so I’m gonna go. But you guys should drink that whiskey and have a good time.”
“Ryan, you don’t need to go,” Jason started.
I shook my head. “No, I do.” I wasn’t kidding about waking up early. After all, I had to be at the Habitat for Humanity site at eight sharp. As much as I wanted to stay and drink—Coke—with them, I knew my mood wasn’t great for company. “See you guys soon.”
Jason and Luke smacked my shoulder as I walked past them. The party went on as I walked by. I smiled, but inwardly, I envied them. I still had a wild night here and there, but if I could help it, they happened rarely. Meanwhile, these people could drink and stay out all night long. They could have fun; they could enjoy themselves, guiltlessly.
With a long exhale, I slipped into my Mustang and pulled away before I gave in to temptation and joined them. 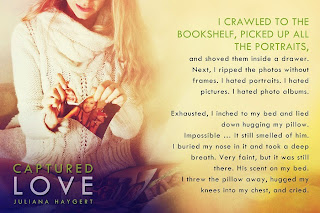 While Juliana Haygert dreams of being Wonder Woman, Buffy, or a blood elf shadow pries, she settles for the less exciting - but equally gratifying - life of a wife, mother, and author. Thousands of miles away from her former home in Brazil, she now resides in Connecticut and spends her days writing about kick-ass heroines and the heroes who drive them crazy.
Co-founder and contributor at NA Alley.
Subscribe to Juliana's newsletter to stay up-to-date with new releases.
Website | Facebook | Twitter | Goodreads